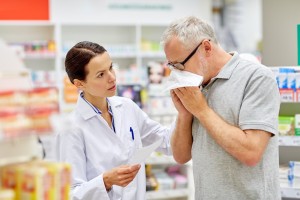 It’s flu season and for anyone who has experienced an unfortunate bout of the virus, you’ll know its something to be avoided. According to the Centers for Disease Control and Prevention(CDC), on average between 5 and 20 percent of the U.S. population contracts the flu every year, causing thousands of hospitalizations and deaths. Additionally, flu seasons have a serious impact on the economy with $10.4 billion in medical expenses and $16.3 billion in lost earnings.

Fortunately, the fall flu season has been relatively mild, but the CDC still recommends everyone over 6 months of age get a vaccination. Here are some things you should know about the flu shot:

What is a flu shot?

A flu shot is a vaccine that features several weakened strains of the seasonal virus and help your immune system fight against viral infection. It can also reduce the severity of the virus if you do contract the flu.

What are the benefits of a flu shot?

There are many benefits to the flu vaccine. In addition to protecting you from illness, you’ll also reduce the chances of passing along the virus to other people. If you do get sick, the vaccine will also likely reduce the symptoms.

When should I get a flu shot?

Flu outbreaks generally occur between October and May and peak between December and February. The CDC recommends that people receive a flu vaccine by October. It takes about two weeks for the vaccine to become effective in adults. Children ages 6 months to 8 years need two vaccinations given at least four weeks apart.

Are there any risks to getting a flu shot?

While the benefits are great, there are a few risks. According to The New York Times, people typically develop a sore arm for a few days after receiving a vaccination and in some cases a low-grade fever. Flu shots are also developed using eggs and can cause allergic reactions in small portions of the population. In very rare cases some people develop a nerve disorder called Guillain-Barre syndrome.

Patients with weakened immune systems, such as those who are pregnant, children under the age of 2, cancer patients, the elderly, and those with asthma should avoid the nasal spray called FluMist.

How effective is the flu vaccine?

The effectiveness of the flu vaccine varies from year to year. The shot is developed based on research estimates of which strains will be most prevalent in a particular season and it’s not an exact science. According to the CDC, there are two factors that determine how effective a vaccine will be: 1) The recipient’s health and age, and 2) how well vaccines match the particular flu strains in a season.

Where do I get the flu vaccine?

Visit Flu.gov to find places near you where the flu vaccine is administered.

Of course, you should always check with your doctor to make sure the flu shot is right with you.

Want to know more about things you can do before you get sick? Check out my book Easy Healthcare: Before You Get Sick.

Empower yourself with the knowledge to Spin Your Healthcare Your Way!