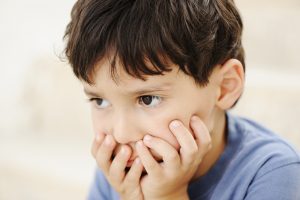 All children develop at different rates. Some are walking and talking before their first birthday, while others seem to lag behind their peers. It’s normal for it to take time for your child to start forming sentences or identifying shapes and colors. But when should their developmental delay become a concern? Sometimes, the delay could be something more severe, such as autism. Autism is a mental condition where a child has difficulty communicating and interacting with others. Often times children with autism have slowed development or exhibit odd behaviors. Today, we’re going to discuss the signs and symptoms of autism.

Second, they dislike physical contact of any sort by anyone. Most children with autism don’t like to be touched. Even the slightest hug can throw them over the edge. It’s normal for a kid to be resistant to being touched by a stranger, but if they have a problem with physical contact with grandma or grandpa this should be a cause for concern.

Third, they have delayed speech or motor skills. You don’t need to be alarmed if your child isn’t talking up a storm by their first birthday; but, by the time they turn two, they should at least be saying a few simple words. You may also notice that they are very uncoordinated. Kids with autism usually have poor balance and coordination.

Fifth, they freak out or throw a tantrum when their routine gets changed. Most kids are able to go with the flow; however, kids with autism thrive on routine. If you notice they get upset at the thought of a changes in plans this may be a red flag.

Sixth, they avoid eye contact. There’s a difference between a kid who is shy and a kid who does not make eye contact. Children with autism are oftentimes in their own little world, so they aren’t fully engaged when they are speaking with you. Also, the thought of making eye contact can be very stressful for someone with autism.

Seventh, they play in an unusual manor. Children with autism typically don’t play pretend. They don’t play cops and robbers like most little kids do. They also like to line their toys up. Obviously this may be appropriate in some cases — for instance, if they’re playing with trains. But if you notice they line up their blocks every time they play with them, this may be a sign that something more serious is going on. Also, children with autism have a tendency to be highly organized. Keep this in mind when looking for signs and symptoms of autism.

If you notice any of these symptoms you should schedule an appointment for your child to see the doctor. The sooner these signs and symptoms are recognized the sooner you can get them the help they need.